Challenges of being a woman reporter in Afghanistan 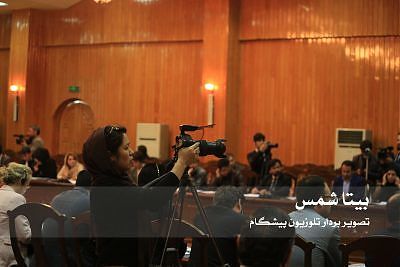 Madina, 24 years old, is a radio operator in Nangarhar Province, in the eastern Afghanistan. She has just resumed her work after two months. Radio waves transmit Medina’s beautiful voice to nook and corner of Nangarhar.

Madina (nickname) says she would like to have a brief understanding of women’s role in media sector of Afghanistan.

Earlier in August this year, ISIS threat made Madina leave her job as a radio operator in Nangarhar. But after spending two months at home, she has decided to come back and put a resolute fight. She was determined that her voice should reach to every remote part of Nangarhar, so that a broadcast of a female voice remains no longer a rarity for common people. This would also send a larger message that women too can work outdoors in all the plausible arenas, including media, and it’s not a crime.

Women have been struggling to achieve their rights. Journalism is one of the prominent professions that has attracted the attention of women, and women have been able to prove their presence in society by turning to this profession and improve public awareness of the role of women in social activities.

According to statistics provided by Afghan Women’s Supporters Organization, there are around 1700 women journalist active in various parts of Afghanistan.

Shabnam graduated from the Kabul University with a degree in journalism. Although her family was against her decision to pursue studies in this field, she was nevertheless not going to give up out of her own conviction.

Shabnam likes her job and says that, “I turned to this profession in order to showcase the facets of the life of women in Afghanistan.”  Shabnam adds that finding job was not easy for her and that there were family disputes as well, but she could finally convince her family to allow her to work.

Shabnam is one of those women who has been struggling for their rights. Now she has also helped other women to enter the field of journalism, in order to fight for their right, or to create a community of active working women. There are many problems faced by women journalists in this country, and some of the major challenges are enlisted below:

The growing threats of terrorist groups such as the Taliban, ISIS and other extremist groups against journalists and freedom of expression continuous to threaten lives of innocent journalists.

The increases of the threats and attacks by these terrorist groups on reporters has not only changed the nature of the challenge, but also led to a massive self-censorship among reporters in insecure areas. Amidst such pressures, the impartiality and neutrality of journalists is questioned time and again.

Jamil Weqar, a representative of the Afghan Journalists Safety Committee (AJSC) in the Central Zone, said that in the central provinces of the country, reporters cannot share the facts without fear of threats from terrorist groups such as the Taliban. They are forced to commit self-censorship in order to protect their lives and their families.

According to the statics by the AJSC, women journalists faced 11 violent attacks in 2018, and since the beginning of 2018, 14 journalists have been killed, including a woman.

Owing to the closed and ultra-traditional nature of some parts of Afghanistan, thousands of working women like Madina end up facing sever social challenges. In most provinces of Afghanistan, people are still unable to digest the fact that a woman’s voice can be heard from a radio or that a woman can appear on a television screen.

In traditional Afghan society, women usually need to get permission to work from different sectors; starting from the family to the employer and also the larger community.

Narges Samon (nickname) says that her family is opposed to her profession of journalism. Her male relatives are not comfortable watching their daughter or sister on a TV screen and larger family cannot come to terms with the fact that Narges goes to a field with other male colleagues, like a photographer and a report.

There are some cases wherein despite the approval from the family and employer, a working woman may be forced to quit her job as the community keeps raising the eyebrows at her choice of profession.

Women journalists in Afghanistan faces different types of obstacles. On the one hand, it’s the harsh behavior of the male dominated traditional Afghan society, on the other hand, the obstacles of unequal payment of wages when compare to male counterparts, insult and humiliation, verbal and sexual harassment in the work environment.

The challenge of female journalists in provinces

More than six hundred media houses are currently operating in the country. Afghan women, as the significant half of the Afghan society, constitute a major part of the media audience, which emphasizes the urgency of the role and the presence of women in media. women journalists in the media reflect the voices of the various strata of the people, but the overall dearth of women journalists put a question mark on the credibility of these media houses.

But there are many restrictions on the work of women journalists in many cities of Afghanistan. Women in Nangarhar province are threatened to wear burqa when they go to their job.

Women journalists face serious security threats from terrorist groups and unidentified people in a number of Afghan provinces such as Nangarhar, Farah, Kandahar, Ghazni, Paktia, Logar, Paktika and so on.

With the increases of such threats in different parts of the country, a large number of female journalists have been forced to leave their work.

Although male journalists also sacrifice a lot and fight for the freedom of speech, yet the female reporters remain the worst recipients of various forms of violence and threats. And this is not just limited to the work place. Women journalists face a similar amount of violence, insults and humiliation when they are interviewing other people a part of their job.