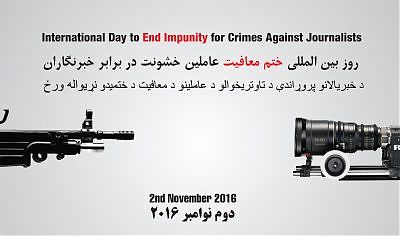 Kabul: Today Afghan Journalists Safety Committee in cooperation with United Nations Assistance Mission for Afghanistan (UNAMA) and UNESCO organized an event in Kabul, Afghanistan on the occasion of the International Day to End Impunity of Crimes Against Journalists, which is November 2nd.

“Impunity of crimes against journalists has to end in Afghanistan, otherwise, it will severely derail freedom of expression and freedom of press. It will result in rampant self-censorship among journalists and media—something that will impede free flow of information.” Said Najib Sharifi, Director of Afghan Journalists Safety Committee (AJSC).

“Impunity emboldens perpetrators and feeds into a vicious cycle.” Said, Pernille Kardel, Deputy Special Representative for the Secretary-General. “Fear and self-censorship in the media are real issues that end up denying the public the right to information and diminishing confidence in the rule of law. Those who attack the free press, a bulwark of any open society, cannot and should not think they are above the law.” Ms. Kardel called on the government and media organizations to make good on new cooperation in order to investigate and prosecute attacks on the free press in Afghanistan.

AJSC is Afghanistan’s premier journalists safety organization which is based in Kabul and has presence in 34 provinces of the country. AJSC works to support journalists and other media workers through emergency aid provision, advocacy, research studies, legal support and psychosocial assistance. AJSC maintains the most comprehensive database of media workers in Afghanistan, which allows the organization to quickly identify and provide support to media workers in need in times of crisis. AJSC is unique in its approach, and has been used as a model for journalist safety mechanisms in countries including Iraq, Pakistan and Nepal.