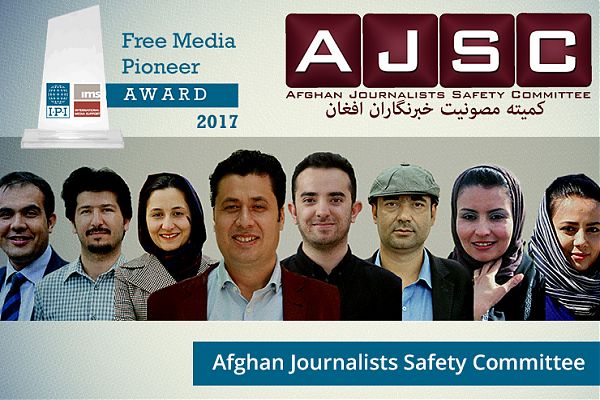 The International Press Institute (IPI), a Vienna-based global network of journalists, editors and media executives, announced the Afghan Journalists Safety Committee as the recipient of the 2017 Free Media Pioneer Award. AJSC is recognized for its courageous and trailblazing work towards preventing, combating and monitoring attacks on journalists in one of the world’s most dangerous media environments. The award also credits the group’s unique achievement of creating the world’s first comprehensive safety mechanism. The accolade will be presented during a special ceremony on May 18 in Hamburg, Germany during IPI’s annual World Congress and General Assembly.

The annual Free Media Pioneer Award was established by IPI in 1996 to recognize news or media organizations that have made innovations to promote news access or quality or benefitted journalists and the media community, thereby ensuring freer and more independent media in their country or region.

“Amid the severe threat to journalists in Afghanistan, the incredibly courageous work of the Afghan Journalists Safety Committee embodies the belief that journalism can and must thrive even in the most hostile corners of the world,” IPI’s Executive Director Barbara Trionfi said. “Their defiance and determination are helping to ensure that the people of Afghanistan can realize their right to inform and be informed, and their activities offer hope and a model for other societies wracked by conflict.”

Founded in 2009, AJSC has played a crucial role towards augmenting journalist safety in Afghanistan; a country named the second most dangerous country for journalists in 2016. In many circumstances, AJSC’s intervention has been critical to saving lives of journalists. For instance, when the Taliban took over Kunduz province in 2015 and 2016, AJSC managed to assist from 80 to 100+ journalists each time. This included emergency evacuation, shelter, health, and psychological counseling. This is one of the many exemplary accomplishments of AJSC in saving lives of journalists who were facing death threats from the Taliban. Over the past 8 years, AJSC has assisted in more than 400 cases of violence and intimidation against journalists and provided training to more than 600 journalists in various parts of Afghanistan.

AJSC’s role has also been fundamental in fostering solidarity among Afghanistan’s media community in the face of extreme repression, violence, and tragedy. AJSC has played a critical role in securing support from the government towards journalists’ safety and press freedom and enacting bills that are crucial to protecting the rights of media workers. Because of the efficiency of the mechanism and the inclusive and collaborative work on the national level, AJSC’s model is currently being replicated in other countries such as Pakistan, Somalia, and Sudan.

Najib Sharifi, Director of AJSC said, “We would like to extend our deepest gratitude to the jury members for selecting AJSC as this year’s awardee. Such prestigious recognition will further our passion, commitment, and pride towards the safety of journalists, which is critical to maintaining press freedom and preserving Afghanistan’s robust media. Mr. Sharifi added, “on behalf of AJSC, I would like to thank all those who have assisted AJSC and its staff at times of need, particularly, the partner organizations inside and outside Afghanistan. I would also like to dedicate this award to Afghanistan’s media community, particularly to those journalists who have lost their lives to the noble mission of informing the public through reporting.”

About AJSC: Afghan Journalists Safety Committee (AJSC) is an independent, nonprofit organization that supports press freedom in Afghanistan. The organization works towards the advancement of journalist safety and rights so that they can report in a safe and fearless environment. AJSC is based in Kabul and maintains a presence in every province of Afghanistan through its official representatives and a network of volunteers. AJSC maintains a 24/7 hotline for emergency situations, provides journalists with safety training, legal assistance, psychosocial support and emergency evacuation upon need. It also carries out nationwide advocacy activities for press freedom and journalists’ safety in cooperation with other media support organizations.