Why Women Are Underrepresented In The Afghan Media 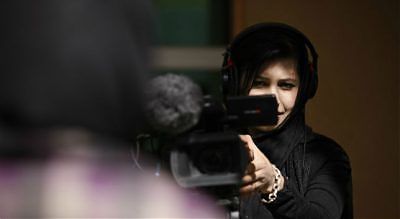 Achievements in the field of media and freedom of expression are usually viewed as the biggest gain of the post-Taliban era in Afghanistan. From one radio station and two papers that were solely used for the purpose of spreading government propaganda under the Taliban, today, there are more than 75 TV stations, a hundred radio stations and hundreds of publications according to the Ministry of Information and Culture of Afghanistan. Despite some important pitfalls, the media community is vibrant and has created fear for those who commit ills in the government and society.

However, the achievement has lacked the critical component of women’s proper representation in the field. Many Afghan women looked up to a new dawn when the Taliban regime collapsed. They stepped out of their homes in huge numbers to seek education, join the workforce, and raise their voices, among others, through media. But it was later proved that media was not very rewarding to women.

Various factors are to blame for the trivial representation of women in the Afghan media community mainly; hazardous working environment, cultural barriers, inadequate skills of female media workers compared to their male peers, unfair contracts in the media organizations, and sexual harassment. Three female journalists have been killed in the past seven years and dozens have been intimidated to stop working.

The lack of interest and will of the government to identify the culprits has cast a destructive and disappointing shadow on the remaining female media workers. Dr. Soraya Sobrang, women rights commissioner at the Afghanistan’s Independent Human Rights Commission, says, the interest and enthusiasm that came into existence on the part of women to join media after the fall of the Taliban regime is dissipating because of unsafe working environment and numerous other problems in the media outlets, especially unfair treatment of women.

This comes at a time that for many female media workers, their profession is the only available means to support their families. Nahid Nazari who works as a journalist for MBN—a private TV station based in Kabul—says she has received many threats against her life during the past couple of years but she has remained determined to continue her work. “I am the only breadwinner in my family. If I don’t work, who will support my children?”

For other women, journalism is their passion and the tool to struggle for women’s rights by raising women’s issues and grievances. Meena Habib, who works as a journalist for Institute of War and Peace Reporting (IWPR) says, she has been threatened many times by unknown people to stop working but she has not given up. “The last time an intimidation letter was dropped to my house, I got very scared.

I got in touch with security organizations but none of them cared about me. Even the day that I was being chased by a man whose face was covered, security officials asked me to provide them with an official letter to be able to take action when I called them to seek help. How could I provide them with an official letter while I was being chased?” Ms. Habib added, “Despite all these challenges, I don’t want to give up because I believe in the value of my profession and this is the only way for me to fight for justice for women”. Besides unsafe working environment, the other two most compelling factors that have thwarted women’s interest in working with the media are unjust and unfair contracting policies of the media organizations and frequent sexual harassment.

Media companies often include illegal and harsh conditions in their job contracts. Female journalists do not have job security and often remain at the mercy of their employers. In most media organizations, both male and female employees are banned from working in another media outlet for six months if they want to leave their job. In some outlets, employees are required to notify their employers six months before the date of their leaving the job.

This has discouraged a lot of female journalists to work for the media organizations and has posed a big challenge to male media workers. It has also created the conditions in a way that has made female media workers more vulnerable to abuse and sexual harassment by the media owners and media managers.

Female media workers sometimes have to surrender to the demands of their bosses because of the fear of not being able to get another job for six months after they lose their work. It is unfortunate that very little attention has been paid in the last eleven years in exploring the work environment of female media workers and improving the situation for them.

The biggest achievement of Afghanistan will remain deficient unless women secure a reasonable presence in the Afghan media landscape. It is therefore for the Afghan government, national and international media support organizations and the international community to take concrete and meaningful measures to improve the situation for female media workers if they want to proudly use the media and freedom of expression as a success story in Afghanistan.