Report on the Murder of Two Journalists in Takhar Province 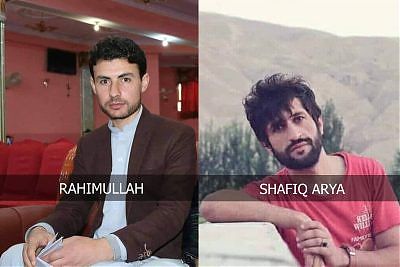 Summary of the Case

On the evening of February 5, 2019, two of Radio Hamsada staff, a local radio station in Takhar province, were shot dead inside the office of the Radio. Two unidentified men entered the premises of the radio, using commercial advertisements as an excuse, and shot Shafiq Arya and his colleague Rahimullah.

“I heard knocking on the door, I asked who it was, they replied that they have come for commercial advertisement and are friends with Shafiq Arya. I opened the door and guided them to the room where Rahimullah was sitting, because Shafiq was not in the office. They asked Rahimullah to call Shafiq and tell him that his friends are here for commercial advertisement. He called Shafiq and Shafiq told him that he was close to the office and will arrive in a bit. When he arrived at the office one of the men told him “now you’re committing sin and talk about stuff, give me your phone.” Shafiq resisted and didn’t give him the phone at the same time Rahimullah also stood up to help Shafiq. One of the men who was wearing a long overcoat took out AK47 and shot Shafiq first and took his phone, then they shot Rahimullah,” Said Firoz witness of the case, a minor kid tasked to open the door for visitors and bring food to the staff of Radio.

In order to clarify the case, AJSC representative in north-eastern zone traveled from Kunduz to Takhar and met with several high-ranking security officials of the province including the province’s Chief of police and Chief of Criminal Offenses Department. He also met with journalists and other stakeholders to unearth the motives behind the killing.

“We have started to vigorously investigate and follow up the case. A joint committee of National Directorate of Security (NDS), Police and other justice and judicial organs have been formed to speed up the process of identifying and arresting the perpetrators. We have found clues that will enable us to find the principle offenders of the crime. We will further explain the outcome of our investigation through a press conference in the near future.” Said Abdul Rashid Bashir, Takhar Chief of Police.

On February 15, 2019, Takhar Chief of Police wrote on his Facebook page that based on the evidence and information gathered by police, they have arrest a suspect (Habib ulrahman son of Gul Rahman) said to be the person shooting the journalists, and they have forwarded his case to the province’s Attorney General’s Office for further investigation.

AJSC has been diligently following up the case with the local authorities and other stakeholders. AJSC representative in the province has been in constant contact with and have met several key officials of the province to make sure case is investigated and followed up properly. Additionally, AJSC representative met the families of the victim journalists to express sympathy for the loss of their loved ones and deliver necessary assistance, including some monetary assistance for the funeral ceremony and other related events.

Based on the information we collected, the incident seems to have criminal motive. This is also confirmed by the local law enforcement authorities on off the record basis, based on the discussions we have had with them. However, they have not officially announced the motives of the crime yet.